This weekend: The Morehouse College Glee Club returns to Charlotte 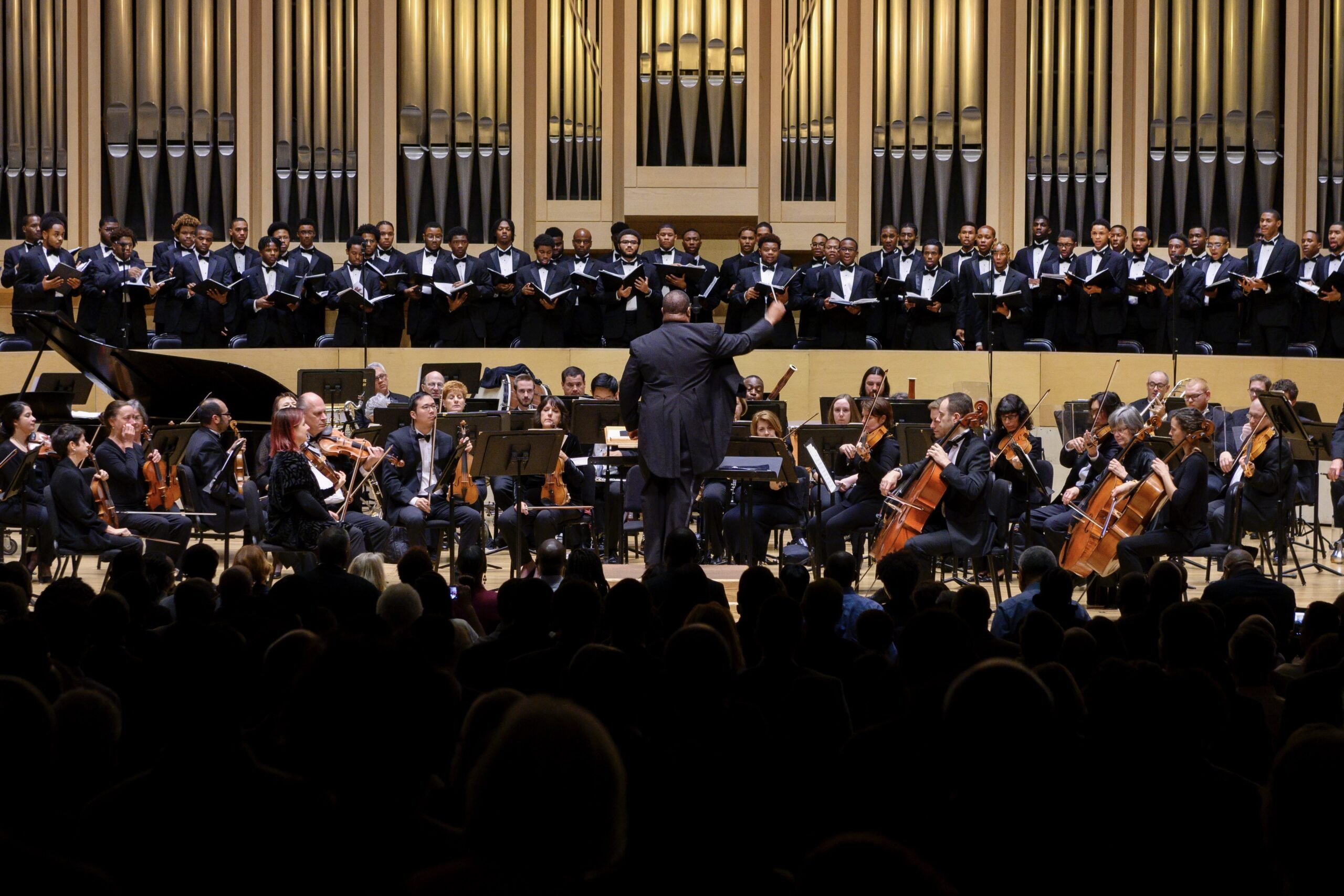 This weekend: The Morehouse College Glee Club returns to Charlotte

The Morehouse College Glee Club returns to Charlotte on Friday, sharing the Belk Theater stage with the Charlotte Symphony.

Since 1987, David E. Morrow has conducted this nationally renowned group.

Morrow,62, entered Morehouse in 1976 as an undergrad. While there, he pursued a bachelor’s degree in music and was, himself, a member of the glee club,

He earned a master’s degree in music from the University of Michigan in 1981 and soon after returned to Morehouse as an assistant director of the glee club. He eventually succeeded longtime conductor Wendell P. Whalum.

QCity Metro spoke with Morrow about his journey and love for music. Answers were edited for brevity and clarity.

When did you find an interest in music and what/who inspired you?

My brother and I wanted to play piano when we were young. My parents rented a piano first because they wanted to make sure that we were serious before they purchased anything. We ended up taking lessons to get better and would often play in school and at church. In high school, I ended up joining the marching band because my school didn’t have a chorus.

Why did you decide to attend Morehouse?

My brother didn’t give me any choice. (He laughed.) My brother, who is three years older than me, went to Morehouse. I actually had planned to go to a different school, but he took the application from the other school and handed me the Morehouse application and said, “This is where you’re going to apply.”

What was it like following behind a musical legend like Wendell P. Whalum, who conducted the glee club before you?

He was my conductor during my time in the glee club and eventually my mentor. It’s always a great thing when you have a teacher who trusts the student well enough that you get to learn more. As a student, I tried to soak up everything that I could from him. When I returned to Morehouse, I served six years as a faculty assistant director, so I also grew with him as a colleague. It was a wonderful experience.

Q: How would you describe your life as a conductor?

It’s wonderful. I enjoy making music and studying scores. As a conductor, you get to know people and their personalities. You pull them all together to sing and create wonderful music for people to enjoy. That has always brought joy to my life.

You took over as conductor at age 27. What challenges did you face leading students who were close to you in age?

Just making the case that I was in charge and not to let my age prevent me from doing my job. Students would often want to become familiar with me, and that’s okay as long as they understood that my position is teacher, not going-out-drinking buddy. I actually enjoyed that challenge, because it kept me on my toes. I had to know my stuff so that they would realize that they need to learn from me and understand that we were not peers in that regard.

You’ve been a part of the Morehouse Glee Club for the past 40 years. What has kept you there?

I still feel that historical Black colleges and universities have a lot to offer for African-Americans in their communities, as well as the larger community. I enjoyed just being able to see that kind of excellence amongst African American students and watching how they go out in the world in whatever field they are in. This whole idea of African American excellence has kept me here all these years.

How has your love and appreciation for music evolved over time?

It’s just part of who I am, and it has become something that has sustained me so well over the years. People often laugh because I don’t play music in my car, but it’s because I always hear it in my head, whether it’s from a performance or rehearsal. I always tell my students, I didn’t choose music; it chose me.

You’ve traveled across the country with a number of choruses. What would you say was your favorite performance so far?

A favorite performance that will always prevail in my life is the 100th anniversary of the Morehouse College Glee Club in 2011. We had alumni of the glee club from around the world come back and sing in a concert. To just see that sea of history and see the camaraderie in music was just special and will always remain in my mind.

Q: What has been your favorite song to perform and/or conduct?

It’s one that we do every year, and it’s called the ”Prayer from Lohengrin.” It’s from the opera “Lohengrin” by Richard Wagner. It’s a piece that we’ve been singing for decades at every commencement ceremony, and our glee club alumni come up and sing it with us. The song is truly inspiring because of its telling words.

How does it feel to be back in Charlotte?

It’s wonderful to be back in Charlotte. Maestro Christopher James Lees is so gracious and such a wonderful musician, and collaborating with him has been a joy. I enjoyed working together to prepare music for the performance.

What can the community look forward to hearing this Friday?

The interesting thing about this performance is that there is a good mix of classical music from the European cannons, as well as from African American composers. There is quite a mix of many different pieces, and the audience will be very inspired by all of the different styles of music that they’re going to hear. There’ll be something for everybody on that concept.