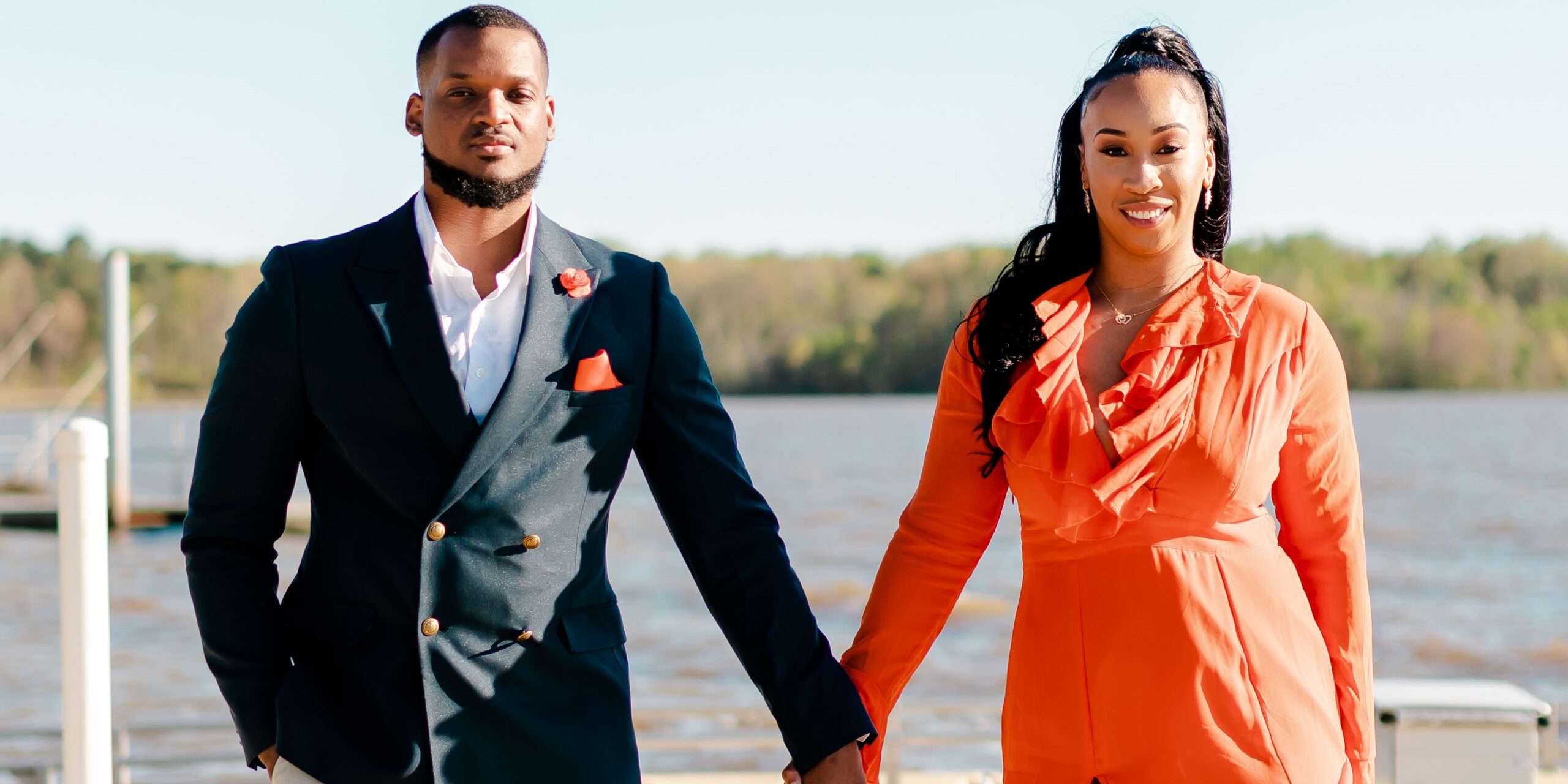 Justin had recently relocated to Durham in pursuit of a new career. Not knowing many people in the area, he was anxious to meet others his age. That’s when he reached out to his frat brothers, who gave him a solution that would change his life.

(Justin) I met Gerlisa through a group chat by RDU Black Professionals. After accepting a new job, I moved to Durham, North Carolina. I didn’t know many people, but I am in a fraternity and reached out to some frat brothers. They introduced me to the chat.

I started going to some of their events. One was a mixer in Raleigh, and I decided I would go to meet some people my age. As the date approached, I almost didn’t go. I didn’t want to go. At the last minute, I changed my mind and decided that I would get up and go since I had already RSVP’d.

There were lots of people there who were about my age. They were discussing relationships, like how they viewed relationships, why they were single and things like that. We played a game where everyone wrote the color of their shirt and name on a piece of paper, put them in a hat, and shuffled them. Everyone drew a slip of paper from the hat and spent about five minutes talking to that person. It was like speed dating.

I drew Gerlisa’s name. She drew somebody else, but I went to her first. When we started talking, I liked her answers and how she was engaged in the conversation. Before long, it was time to rotate.

At some point during the mixer, somebody asked her, “Why are you single?” She said, “Nobody’s met my expectations or standards yet.” I asked, “So, what are your standards?” She seemed so cool. I liked her vibes and thought she was somebody I could get along with and would like to get to know the city with. At the end of the mixer, we linked up again. I told her I was new to the area and asked if we could go to dinner. We just hit it off from there.

(Gerlisa) We had a good time during our initial conversation. I liked his vibes. We ended up talking throughout the night and hanging out until 2 a.m. We talked about what we were doing, where we came from, and what our plans were moving forward. We had similar interests and goals. I appreciated that about him.

(Justin) After the mixer, we went to Carolina Ale House. We went with another couple, a spur-of-the-moment double date. It was a late night, and they were somewhat slow and short-staffed. We ordered food, but they were taking a while. Gerlisa got a little angry, but she did a happy dance once the food came. After the other couple left, we went to the car and talked in the parking lot for another hour. Our first meeting and the first official date went very well.

This is “The One”

(Justin) I knew I had met the one a few months later. We went on a few more dates, and we began hanging out at each other’s houses. Everything just felt right. My dad always told me, ” You will know once you know. I knew in a few months this was something I wanted to pursue.

(Gerlisa) There were a lot of reasons to believe Justin was the one. It was the consistency and good vibes. We were like-minded. He is patient with me. All these qualities convinced me that this person was meant for me.

(Justin) At first, it was hard because she was playing hard to get. She told me she was thinking about moving. I was like, “Oh, okay. I just got here.” I was very persistent without being too aggressive. I told her that I would like to pursue this with her if she decided to stay.

She showed me that she cared about me by sometimes bringing me food for work, calling to check on me, and doing small things like that. It made me feel she was the person I needed in my life. People can want somebody who is not the somebody that they need. When I met Gerlisa, I met somebody I wanted and somebody I needed simultaneously.

(Justin) The proposal was on August 1, 2021, at Pullen Park in Raleigh. I had already been thinking about it for a while. I had even met some friends, and they were like, “When do you think it will be that time?” I said, “That’s what I came here to talk to y’all about.”

I hired a company called Heart in Hand Proposals. They specialize in creating the perfect scene for proposals. They help with decorating, designing, planning, and setting up everything. They also clean up for you. They did an amazing job.

I made a close friend’s group on Instagram and told everyone where to meet if they wanted to be involved. I managed to get some of her friends and family from Rhode Island and North Carolina to meet us at Pullen Park.

It was hard to keep the secret. Gerlisa says she knew, but she didn’t. She is very nosy, and all our mutual friends are close to her. When I talked to them, Gerlisa would always ask questions. Some of our friends share their locations, so I asked them to turn their locations off when they were here.

(Gerlisa) I didn’t know the details, but I knew it would happen that day. I just felt it. When I got there, I was amazed. My mom from Rhode Island and my brother from Virginia were there. My closest friends from Rhode Island, who had not yet visited me in North Carolina, were there. It was great. Justin told me he wanted to get something to eat to get me there.

(Justin) I told her we were going to a fancy picnic but didn’t pack baskets or anything. I thought it would be like the ones you see on Instagram with the little mini table and fine china. It was a walk through the park.

Pullen Park has a gazebo with a bridge leading to it. One of our friends was singing as we walked over the bridge toward the gazebo. Our friends and family were lining the bridge holding roses. I proposed when we reached the gazebo. Everybody surrounded us and gave her their roses which formed a beautiful bouquet. Someone brought a couple of bottles of champagne. It was wonderful.

(Gerlisa) I was excited, happy and a little shocked.

(Gerlisa) Wedding planning is going well. We are getting married in Montego Bay, Jamaica. We already have the date and venue. It will be a beach wedding at the Royalton Blue Waters Resort. Our guests are booking now. We are waiting for the final headcount to plan the details.

(Justin) It would not be us if we didn’t do something extravagant. We travel all the time and have been all over the world. So, it only made sense for us to have a destination wedding. Besides, that is something that Gerlisa always talked about.

(Gerlisa) We have a wedding planner through our travel agency. They are helping with booking our guests and talking to the resort. In September, we will plan all the details of everything. We have a package plan allowing us to choose the options we want. We can bring our things if we want. We are just going to wait to see what they offer before deciding.

What They Are Looking Forward to

(Justin) I am looking forward to just having everybody there. We are having a three-day wedding event. We will have a welcome party, wedding, reception, and excursion. The excursion will probably be a catamaran boat party on the third day. I am excited to have all our friends and family celebrate with us. We haven’t seen some of them in a while.

(Justin) My advice would be to enjoy being engaged. Don’t try to rush it. Allow yourself to grow with your partner while you are engaged. Couples therapy has been great. We have gotten closer during the engagement. I would also say try to get a wedding planner, don’t try to do it yourself. If you can, look at the destination wedding. Pricewise, I think it will be very favorable in the end.

(Gerlisa) Go to couples counseling and be vulnerable, share, talk, communicate, and be patient. Enjoy the engagement process. Being engaged does not mean you have to be married the next day. If you have the time and want the time to enjoy your engagement, I recommend you do. Also, have goals as a couple to work towards for marriage.

Are you engaged, married for one year or less, celebrating an anniversary, or renewing your vows and would like to share your story? Click here to begin—email questions to helen@qcitymetro.com.