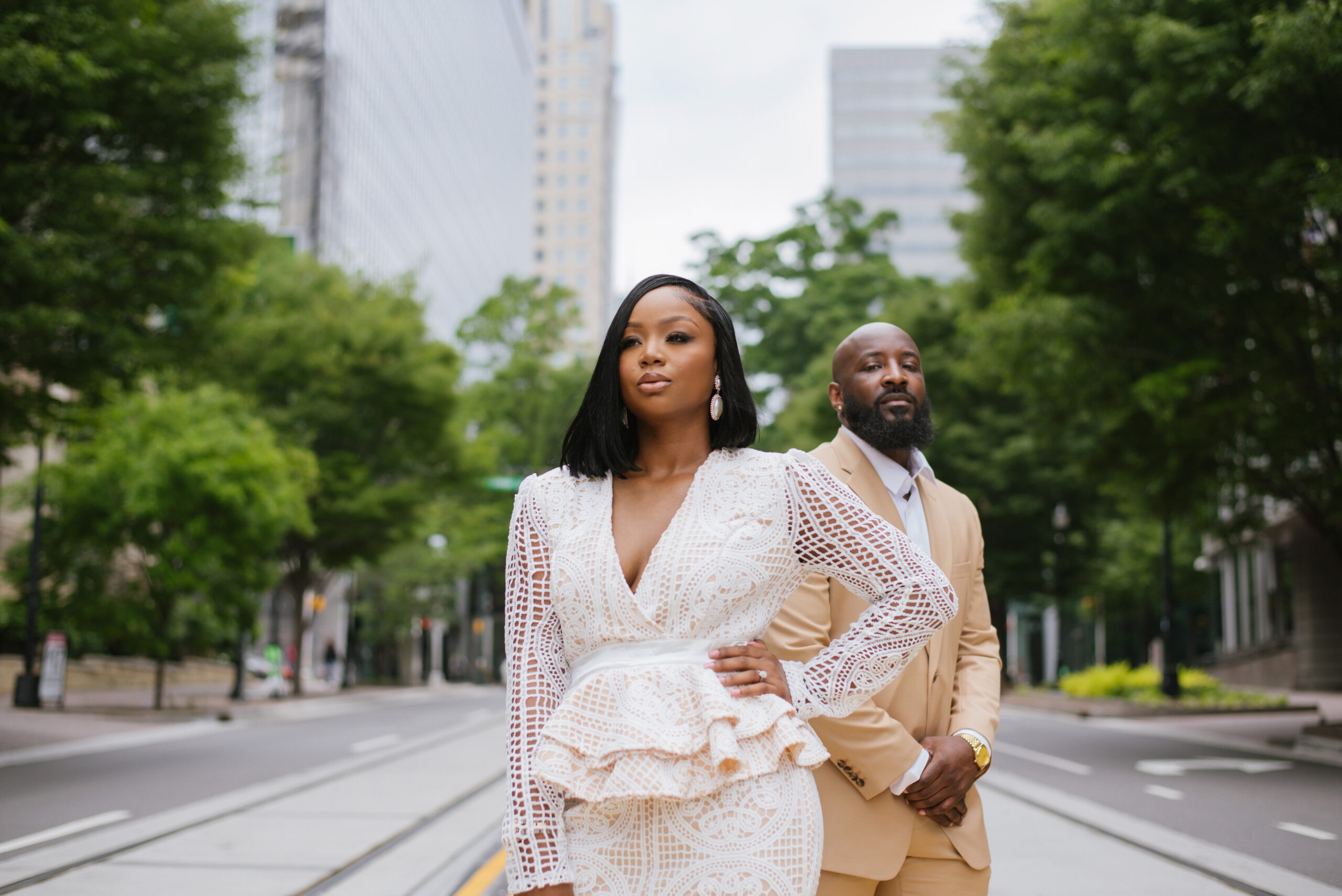 Arthur was visiting Charlotte when he noticed a group of ladies posing for a selfie. When he asked if they needed someone to take their picture, he had a goal in mind. He succeeded.

(Ebony) We met in July 2018 at an all-white party at the Ritz Carlton in Charlotte. Tate, that’s what I call him, was visiting a friend here and they were at the party. I was there with a couple of friends when he offered to take our picture. He and I started talking and he got my phone number.

(Arthur) I was living in Delaware and was visiting a friend who had moved to Charlotte. We were going out for his birthday and ended up meeting at the all-white party at the Ritz. That’s when I ran in to Ebony. She was with a group of girls who were trying to pose and take a selfie. Her smile and laugh caught my attention. I introduced myself and asked them if they wanted me to take their picture. My goal was to attempt to make her laugh again while taking the picture. It was a success.

We exchanged text messages for a couple of weeks. I told her that I planned to move to Charlotte, but I don’t think she believed me. We tried to stay in touch but eventually, we lost contact until I moved to Charlotte a year later. I reached out to her and asked, “Hey, do you know of any parking decks in downtown Charlotte, because I work downtown now?” I was trying to get her to take the hint, but she just replied, “No, I don’t know of one because I parked for $5 a month in my parking deck.” Later, she contacted me again and said, “You weren’t going to tell me you were in Charlotte again?” We met up and went out on a lunch date.

(Ebony) We have conflicting views about our first date. It was a Friday, and we always had casual Friday at my job. I was wearing jeans and a shirt, and we walked to Carolina Ale House. By then I vaguely remembered how he looked and thought he was shorter than he was. When I saw him, I just remember thinking, “Oh, he’s very handsome.”

We talked about everything that was going on with his move and his plans, then spent time just catching up on the past year. I thought that the date went well. He says that it didn’t. I ended up having to follow up with him and ask, “Are you interested in going somewhere else?”

(Arthur) That’s her side of the story. Actually, When I walked in and saw her, I was like, “Okay, all right. I’m liking what I’m dealing with right now.” I thought the date went well; I just didn’t think that she was interested. I thought it was just a regular conversation that you have among friends. That’s how it seemed to me until she reached out to me the following Monday or Tuesday. She said something like, “So, we can’t keep in touch with each other anymore?” Basically, “Hey, I haven’t heard from you since our first date.” We talked again and planned a second date to go to Firebirds for happy hours.

This is “The One”

(Arthur) A lot of people say that the quarantine in 2020 was kind of rough for them. To me, it was an eye opener and a blessing, because we were able to sit down and discuss everything under the sun. We were able to open up to each other and talk about a lot of different things. There was nowhere to go and not too much to do. It left us no choice but to sit and talk. I realized that she was the one just from her thought process and the goals she had set for her life.  She made me feel comfortable. Everything just clicked. Even though I was moving far away from home, I had found someone down here who had the same ideas, morals and values that I already had. It just made me feel more comfortable in Charlotte.

(Ebony) There was several things that made me believe Tate was the one. The first was how he related to my son. When we met, my son was four. We waited until about June 2020 for Tate to meet my son, and he was very good with him. Tate took the time to get to know him. It was very genuine. I loved the way he did that.

I also think we got closer due to COVID since we had to stay in more. Both of us ended up having COVID at different times. I got it shortly after it first came out. He was there for me. He took care of me, getting me food, medicine, all that stuff. He ended up getting it in July 2020 and I did the same thing. I wanted to make sure that he was taken care of. During that time, we got to really spend a lot of time in the house together. We had dates in the house and used Door Dash a lot. We watched a lot of movies together, just spending that extra time.

By spending so much time together, we learned each other’s habits and if we could possibly live with each other. We learned a lot from that. I realized there was not much that I didn’t like about him. Even after spending all this time together, he didn’t get on my nerves. This could be something serious.

(Arthur) We had already discussed that we wanted to be together and were going to end up getting married. Those talks included possibly adding an addition to the family and getting a house. After several trips to the mall, one day we stopped by Jared, and she started trying on engagement rings. I took note of her size and the styles she liked and went back in May 2021 and purchased a ring. That began the process of trying to get everything set up.

I reached out to her father and asked for permission then let my family know what was going on. It was very hard trying to surprise her because she wants to know what’s going on, and she knows my habits. So, when I was doing things that were not usual for me, like taking phone calls outside because I’ was trying to set up arrangements or telling her I was running to the grocery store when I was actually picking up my mom and my sister from the airport, or saying I was at the gym when I was at other places, it was very difficult because she started being very suspicious.

By the time we got to the proposal location, our family members and friends were all there. When we opened the door, and everyone said surprise, she knew something big was about to happen and ran off really quickly. Thankfully, she came back.

Grayson, our oldest son, was unable to be there. A few days before the proposal, I took him outside and acted like we were playing basketball. I recorded him saying, “Hey, Mommy, I love you. Will you marry Mr. Tate?” I figured if he couldn’t be there, at least we could hear his words. I played the video during the proposal. By the time she turned around, I was on my Knee.

(Ebony) When the door opened and I saw everybody, I walked away. Tate came and got me, and I went back inside. I was like, “Oh my God, I can’t believe y’all did this.” Then I went back out before finally coming back in. I was just so surprised and shocked.

(Ebony) Wedding planning is actually going pretty well. We have already given my bridesmaid proposals. So, I have my bridesmaids. His groomsmen are next. We have selected the venue and the caterer. We’re currently looking for a DJ, photographer, and of course my dress. We don’t have a wedding planner. It’s just me and him. We would like to have about 125 guests.

(Arthur) I think a House is the main goal. As a father and a future husband, I just look forward to getting a house for my sons to grow up in, a backyard for them to play in and to build a family.

(Ebony) I think that we’ve been doing good with our planning because we’ve started with a good amount of time ahead of us. Also, we have not been falling victim to what people tell us we should do or shouldn’t do. We’re sticking to what we love because we want to keep it about what is true to us.

(Arthur) Most of our growth and expansion happened during quarantine. So, love can hit you at any time. I would just say live in the moment.