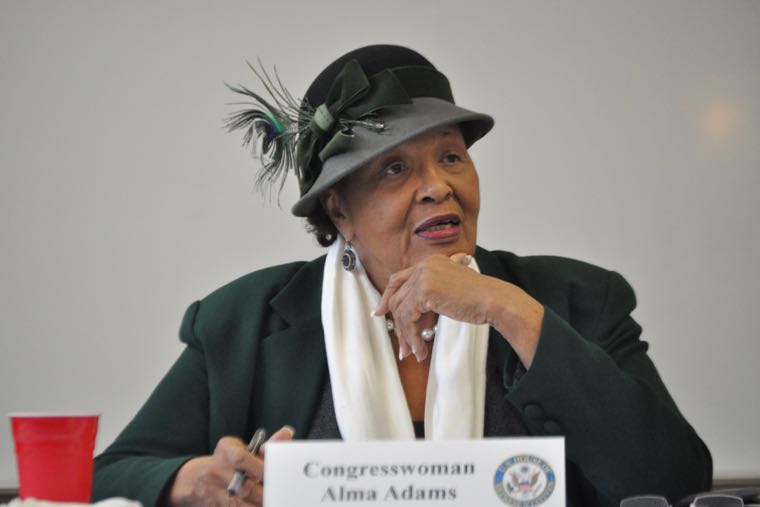 In the wake of a series of high-profile mass shootings, U.S. Rep. Alma Adams last week joined a growing list of Democrats in calling for measures to curb gun violence.

“Mass shootings are such a common occurrence that they have defined the United States,” Adams said Friday during a virtual event to mark National Gun Violence Awareness Day.

“We’ve reached a point in our country where people have legitimate concerns about making it home at the end of the day,” she said.

Adams, who was joined by Mecklenburg County District Attorney Spencer Merriweather, said gun violence is a common method of hate crimes and that “our most vulnerable” — including children and the elderly — are often targets.

She called for universal background checks and so-called “red-flag laws” to keep guns out of the hands of those who would commit mass murder. (Red-flag laws permit police, family members and others to petition a court to have guns temporarily taken away from people who are deemed dangerous to themselves or others.)

Adams, who represents the 12th congressional district, which includes much of Mecklenburg County, said she has co-sponsored 19 “critical pieces of legislation to stop gun violence,” including HR 7910, or the “Protecting Our Kids Act.”

Merriweather, who is seeking re-election as Mecklenburg D.A., said he was a junior at UNC Charlotte in 1999 when he heard about the mass shooting at Columbine High School in Colorado, which claimed the lives of 12 students and one teacher.

“I would have thought that so many years later we would not still be dealing with this,” he said. “It’s amazing how the proximity to gun violence gets narrower and narrower.”

According to data compiled by The Washington Post, the United States has witnessed more than 230 mass shootings so far this year. The Post defines a mass shooting as one where four or more people — not including the shooter — are injured or killed.

On Saturday, three people were killed and 12 more where hurt when shooters opened fire on a crowded street in Philadelphia’s entertainment district. Initial reports indicate that the carnage began when a brawl between at least two men turned into a wild shootout.

According to the Washington Post analysis, “not a single week in 2022 has passed without at least four mass shootings.”

Despite the rising death toll, Americans remain deeply divided over the issue of gun control — a divide that is reflected in the halls of Congress.

Andrew Proctor, an assistant professor of politics and international affairs at Wake Forest University, said he’s optimistic that Democrats in the House can pass legislation to address gun violence.

“The bigger question,” he said, “is what’s going to happen in the Senate,” where 60 votes would be needed to end a certain filibuster by Senate Republicans.

“Part of me believes that this will lead to something different,” Proctor said. “There have been moments in the past where they’ve gotten close to changing things, but that was back when Obama was in office. Proctor said the fate of gun-control legislation rests on Senate Minority Leader Mitch McConnell. Last month, following the Uvalde massacre, McConnell told CNN that he was “hopeful (Congress) could come up with a partisan solution.”

McConnell appointed Texas Republican Senator John Cornyn to work with Democrats to craft a gun bill both parties could support.

“It won’t be unanimous, but the Republican caucus will follow his lead,” Proctor said of McConnell.

Tyler Lee, a Republican who is seeking to unseat Adams in the heavily Democratic 12th district, said he believes efforts to pass gun control legislation are misguided.

“I think we miss the core issue: the person behind the gun,” he said. “I can legislate all day long, but it comes down to personal responsibility.”

On Twitter, Lee has defended gun rights in all forms. Last November, he celebrated the acquittal of Kyle Rittenhouse, a 17-year-old white male who faced murder charges after he fatally shot two men and wounded another during public unrest in Kenosha, Wisconsin.

In April, when President Joe Biden banned the manufacture of some “ghost guns,” Lee tweeted that the ban infringed upon Americans’ Second Amendment rights.

Lee said he views gun-control proposals as hypocritical, including proposal that would raise the minimum age for buying certain types of guns.

“The left always tries to tear apart traditional family values,” he told QCity Metro. “If you can confuse children about their gender at 14 in some of these states, why are they suddenly not an adult when they want to purchase a gun?”

Lee won last month’s Republican primary in the 12th district with 43% of the vote.