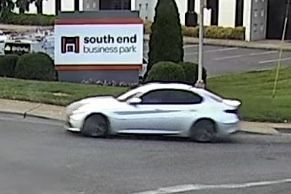 The Charlotte-Mecklenburg Police Department is asking for the public’s assistance in finding a man suspected of kidnapped a woman in the South End area Monday evening.

According to CMPD, a group of teenagers told them that they saw a woman near a rental scooter on 3013 Griffith Street being assaulted by a man before getting dragged into his car around 6:30 p.m. The suspect was last seen headed onto I-77 southbound.

The witnesses also shared with officers they heard the woman calling for help along with the car’s horn beeping during the apparent struggle.

CMPD shared images of the suspect’s car, which appears to be a grey 2016 Alfa Romeo Giulia. The front side of the car appears to have a black license plate bracket on the driver’s side.

Police were unable to get an accurate read on the rear license plate.

Police say they don’t know if the suspect and victim knew each other, or not.

The victim was identified as a Hispanic woman, but further descriptive details for her could not be provided at the time. The suspect is described as a Black man with short hair and a mustache, CMPD said.

The investigation is ongoing. Anyone with information is urged to call 9-1-1. Anonymous tips can also be left with Crime Stoppers at 704-334-1600.

This story is developing…